**Please note: This article was written in 2017 before the pronoun “they” was in common usage. With Rain’s permission, I used the pronoun “she” because we were both familiar with the conservative nature of the audience who would be reading it.

Scroll down to see newspaper version of article

Rain Dove keeps an escape bag near the door of her apartment. It’s for times when her life as a fashion model and activist gets too intense and she needs to connect back to her Vermont roots.

She has a secret place just a 50-minute train ride out of New York City.

“I go straight to the woods and I light a fire,” she said during a recent interview in her Brooklyn, New York, apartment. “I have a cooler buried there, and in the cooler is a tarp and some stuff … That’s as close to my Vermont roots as I can get.”

The pressure of success that drives her to the woods is a far cry from how she grew up. Her childhood was a medley of the Northeast Kingdom – moving with her family from town to town, she lived in Albany, Westmore, East Burke, Newport, Chelsea and Brownington. She lived in Newark, Vermont, while attending St. Johnsbury Academy, class of 2008. At the time she was known by a more traditional name: Danielle Dubilewski.

“I grew up thinking I was an ugly girl,” Dubilewski said. “Britney Spears was very much a popular thing. The Backstreet Boys were a popular thing. Shakira was just hitting the charts. And I just really didn’t fit that aesthetic … Vermont, though very prideful in its farming community, still does have an aesthetic standard for women and beauty.”

She’d had short hair since a childhood bout with head lice, and while her female body grew (she easily grabs her breasts and proclaims, “I’m a natural double D!”) so did her masculine facial features. Even in elementary school she was teased for being “fugly” and “manly.”

“I’m not like these other people who have an ‘F’ on their birth certificate,” she said. “I often joke that the ‘F’ on my birth certificate didn’t stand for ‘female,’ it stood for ‘failed to pass.’”

Turning it to her advantage

Dubilewski loves Vermont – she still keeps her Vermont ID, even though she hasn’t lived in the state for years. But she couldn’t stay here.

“I needed to leave Vermont in order to be a bigger person,” she said.

She landed a job on a firefighting crew in Colorado where she was mistaken for a man. “I didn’t correct them.”

Having grown up working on Vermont farms in her childhood prepared her for the physical work. She thought she’d found the “golden ticket” – passing for a man.

“I thought it’s so much better to be perceived as a cis white male in America than it is an ugly woman. Or even a gay ugly woman,” she said.

Because firefighters wear so much equipment, she didn’t worry about hiding her body while working. Off the clock, she used an Ace bandage to bind her chest. Eventually she learned how to hide her double D’s using posture when necessary.

It was around this time that she began thinking in terms of “gender capitalism” – because she can pass as either gender, she would choose the gender attributes to play up in any given situation.

“There’s this recognition that there are rules. And if you play by the rules in certain places, you’ll get advantages given to you. And I decided that I just don’t have time to be disadvantaged,” she explained. “If there’s no advantage either way, if they’re kind of the same, I’m myself. But if there’s an advantage, I’m going to go for it. Because I’ll be damned if I’m going to stand in line.”

Her views on gender and relationships began to shift as a result.

She’s also not concerned with what gender pronoun you use to refer to her.

“A pronoun is just a sound to me and all I’m listening for in that sound is positivity. So I’m not one of those people who is going to freak out if you use ‘he’ or ‘she’ or ‘it’ or ‘one’ or ‘they.’ As long as you have good intentions, I don’t really care.”

Dubilewski’s transition into modeling was a fluke. She sustained an injury as a firefighter and enrolled at the University of California in Berkeley to study genetic engineering and civil law.

She became friends with a woman who was modeling for the DKNY brand.

“She said, ‘You should be a model.’ I said, ‘I don’t want to be a model, models are pretentious people who don’t eat.’”

But a lost bet over a football game led to Dubilewski attending a casting call for a Calvin Klein runway show.

“I didn’t want to go. It just sounded like the worst possible thing you could do to me.”

But, true to her word, she went to the casting. “They told me I was there on the wrong day. And I was like, oh they must do it by hair color because everybody there was blonde.”

They told her to come back the next day, and when she did, she found herself in a room full of men. “I was like, oh they think I’m a dude! Well that’s okay, I’ve always been seen as a male.”

She was cast to walk the runway, but when they handed her the outfit for the rehearsal it was a pair of men’s briefs.

“I realized: I’m in a men’s underwear show!” she said. “I knew I had two choices. I could say, ‘Sorry, but I think there are some things on my body that won’t go with your particular marketing scheme for this garment.’”

Or she could do what she did: “I walked out, no bra, no anything, double D’s swaying side-to-side.”

There was an audible sound of shock in the room.

“They knew – you do this wrong, it’s a lawsuit. This person came up to me and was like, ‘Is this your first time modeling?’ I said yes. They were like, ‘Really? You’re so good! … You’re not like these other amateurs over here. They can only wear underwear. But you’re so good, I think you could rock more clothing!’”

Dubilewski laughs at the memory. “Like models during their career start off naked and earn their way up to being clothed!”

She walked the show wearing a men’s shirt. They paid her an extra $250 to not show up at the after party. It was her entry into world of being a gender-fluid model.

Back to the woods

There were a few stories written about her – the type with headlines that read “One of these dicks is actually a chick.” Designers started calling, wanting to cast her.

She still wasn’t interested in modeling and turned down the jobs. “I’ve never gotten comfortable in front of the camera … I came from a background that couldn’t afford this clothing, and I hate showing that I’m having a great time in these garments when other people feel like they need to have these garments in order to have a great time.”

Oddly, in the modeling industry, that made her all the more desirable.

One morning she woke up deciding she needed to model, and she would use her platform to advocate for the kind of change she wants to see in the world.

That was four years ago.

She’s worked with Italian Vogue, Dove Soap, and a host of other household names.

Whenever she shows up in something high profile, she gets a lot of feedback. “People send me lots of naked photos, or things saying ‘I’m going to kill you.’ It’s both good and bad, and I go hide in the woods because I don’t want it to go to my head … I go to the woods to remind myself this is where I came from.”

Those trips to the woods keep her sane. “I build a fire, I build my lean-to from scratch, I catch my dinner, I forage for plants,” she recounted. “At the end of the day, I’ve got a shelter, I’ve got food in my belly, I’ve got the stars and I’m completely sustainable. I realize as long as I have my cognitive ability to do these things, this is the worst I’ll ever have.” 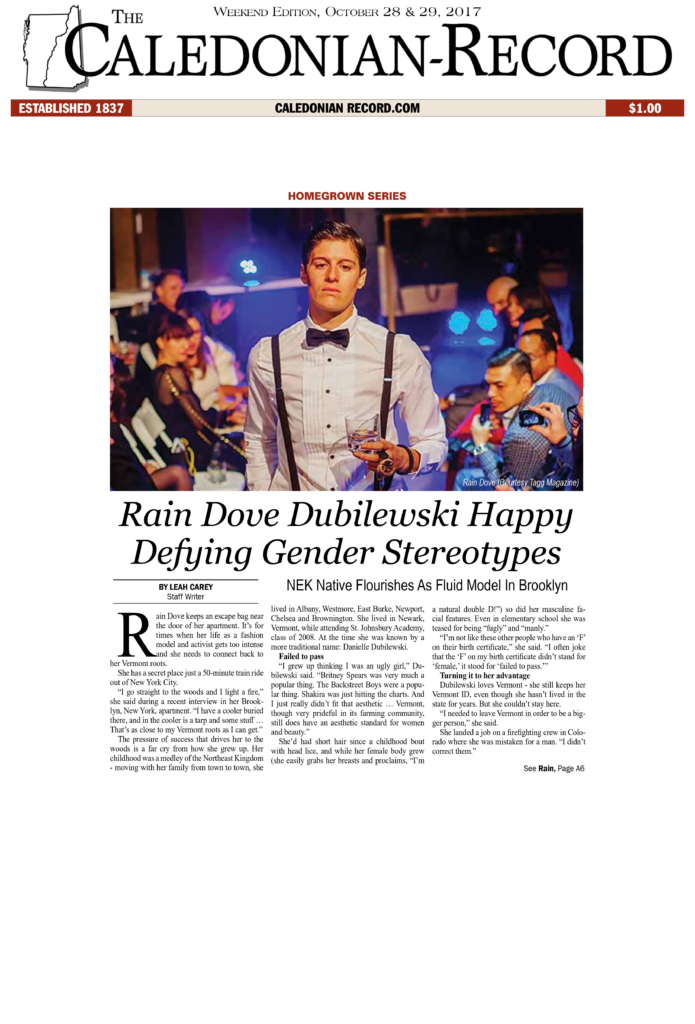